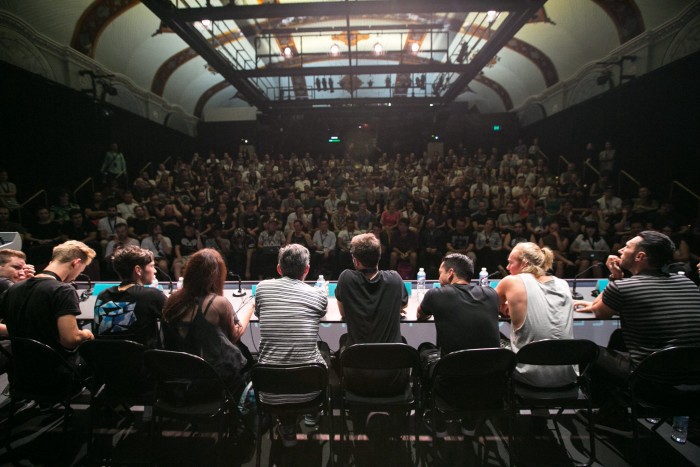 Networking, networking, networking. As a touring artist, either one who is established or emerging, one of the best things you can do to gain a foothold on your career is to find those places where you can schmooze with movers and shakers. And these types tend to be at music conferences all over the world.

Whether your budget is big or small, or whether you’ve got a team behind you or you’re flying solo, attending a reputable music conference (and taking full advantage of its benefits) can be a game-changer. They are chock-full of local and international delegates who specialize in finding and supporting talent, selling their shows and music, and, in truth, having a good time while they do it. They want to be excited about you, and you should be excited about them!

Applying for an official showcase is always a good first step. Most conferences have a festival portion that features performances in various venues so that delegates and artists can hop around to see those acts that have piqued their interest. Performances are usually festival-style lasting an average of 30 minutes — just enough time to grab their attention and make them want to track you down for a chat. Getting a showcase usually means that you (and your band mates) will receive at least a conference pass and a bit of cash for playing. And this pass is exactly the golden ticket you need for mining potential networking opportunities.

Here are Optune’s top seven music conferences listed in no particular order. Each of these events is totally worth you taking the time to brush up on your performance skills, your networking savvy, and your online presence. Before making your way to any of these, however, be sure to update your Onescreener page, your website and your social media links — you’ll need them. Here we go:

1. ADE, Amsterdam — October 16–20, 2019.
If you’re an electronic artist, you’ll want to head to this beautiful city for the Amsterdam Dance Event. Held annually since 1995, it’s one of the leading conferences and festivals of its kind featuring 2500 artists, 600 speakers, and 1000 events in 200 venues. That sounds overwhelming, I know, but they have a great website where you can pick and choose what types of shows and talks you should attend. Events range from discussions about connecting hip-hop, bass and beats worldwide to innovation, social change and emerging technologies in the music industry. Be prepared to immerse yourself in three days of mind-blowing showcases and enough eye-candy to keep you going until the next ADE. Oh, and be watchful of the bikes. There are lots ‘n lots of bikes in Amsterdam.

2. International Music Summit, Ibiza — May 21–23, 2020.
Another big one for the electronic music-makers and DJ’s, this three-day event has been hailed by the media as “the TED of music conferences”. Its focus is on providing a platform for the world’s top electronic music aficionados to discuss and debate the current state of and future trends in that genre of music. It’s an intensive event that means business. But as you can imagine, there’s pleasure in the mix. It does take place in Ibiza, afterall.

3. Folk Alliance International, New Orleans — January 22–26, 2020.
Acoustic guitars, banjos, fiddles and…beats? Yes. This well-established conference seeks to be inclusive in every way. What began as a platform to celebrate and promote (North American) folk music, has now become an international melting-pot of musical styles, genres and industry leaders. While you’re probably going to find more singer-songwriters than DJ’s, the FAI has a warm, colourful and heartening reputation. If you’re the next Ed Sheeran or Mumford and Sons, go here. They state, “Conscious programming will explore the themes of diversity, inclusion, immigration, intersection and influence”. Pretty darn cool.

4. WAVES, Vienna — September 26–28, 2019.
While this striking city is known foremost for its classical music, there are healthy and growing indie-rock, hip-hop and electronic scenes abounding. The WAVES festival and conference seeks to promote discussions on social, political and technological influences within the music industry, and to facilitate building bridges between the musical cultures of eastern and Western Europe (connecting Sweden and Hungary this year). Another pertinent topic this September is Women in Live Music Production. Vienna is grand in every sense of the word and its people like to talk. Get your eyes, ears and mouths ready to network in style.

5. Reeperbahn Festival, Hamburg — September 18–21, 2019.
Germans get to the point, and so does this fun-filled, expansive event. With more than 5000 industry professionals and media reps from 56 countries in attendance, this is a place to be seen and heard. Reeperbahn presents a wide spectrum of acts from all genres including punk, heavy metal, indie, hip-hop, jazz and soul. They say, “Since its debut in 2006, the Reeperbahn Festival has grown to become one of the most important meeting places for the music industry worldwide, and, as Europe’s largest club festival, it boasts a broad spectrum of emerging and more established artists”. What more is there to say? Get your applications ready for 2020 and visualize eating the best Currywurst.

6. M4Music Festival and Conference, Zurich — March 19–21, 2020.
Pop music is the name of the game in Zurich each year at M4Music. This small spring-time event packs a punch bigger than you would expect from this low-key but bustling city. While the focus is on exporting and showcasing Swiss talent, there is room for international acts. The industry panels cover a wide range of topics from social awareness to technological advances in music, and the overall vibe is like hanging out at a super cool backyard party. Much of the conference is free to the public pending registration. It’s the hip place to be every March.

7. Canadian Music Week, Toronto — May 20–22, 2020.
Taking place in one of North America’s coolest (and coldest! But you’ll be fine in May) cities, CMW features a conference, awards shows, music festival, mentorship programs, music supervision and sync workshops, and a tradeshow. It’s a feast for the ears and a veritable networking buffet. This multi-national city generates some of the world’s top musical acts and the professionals who take care of them. Attend this conference if you’re bent on becoming the next Drake or Broken Social Scene. Now in its 37th year, Canadian Music Week knows how to do it right.